Passes are a notable game feature and are used to read stories on Episode. They are available in different packages with an in-app purchase instantly, three free passes every 4 hours, or with a user code found within the app.

Warning! Any contributer who tries to edit in referral codes (on this article) will automatically be blocked on this wiki. Contributers may post them in the comments only, but not on this article.

In the early version of Epsiode, passes were available seperately on individual stories. While waiting for more passes for Campus Crush, you could play through Real Hollywood if you had passes on it. In the recent updates, all passes are shared through stories, and you can only play one at a time before waiting, unless purchasing them in-game with real money.

Episode contains IAP, where you can use money from your Itunes account in order to buy quick passes. These passes come in different packages, all at different prices as shown below.

Currently, a video-watching or offer function is not available to earn free passes on the app without buying more, unlike other games but however may implement the idea soon. There are currently only two legit ways of obtaining passes for free.

There are upset players over the wait required to get more passes. For some players there is known to be a major glitch which allows certain players to get 2 episodes per 2 hours, while for most others it is 4 for 3 passes.

The app has received a high amount of low ratings on the Google play and app stores. It is unknown if this waiting time will ever be reduced. 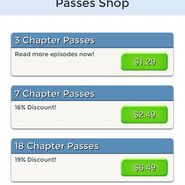 An old screenshot of the Passes shop
Community content is available under CC-BY-SA unless otherwise noted.
Advertisement